There are movies that doesn’t exist. They could be short films, trailers or short clips of much longer films. Unfortunately, these films are fake, specifically shot to be used for real films, sometimes so convincing that they may seem real. Do you recognize them all?

Did you know that the film you see in Home Alone, actually, doesn’t exist? Angels with filthy souls, in fact, is a noir-style short film specifically created for the occasion. It took only one day to shoot it, but the result was remarkable: an authentic parody of the gangster-noir genre, whose jokes have now become memorable (“Keep the change, ya filthy animal!”). 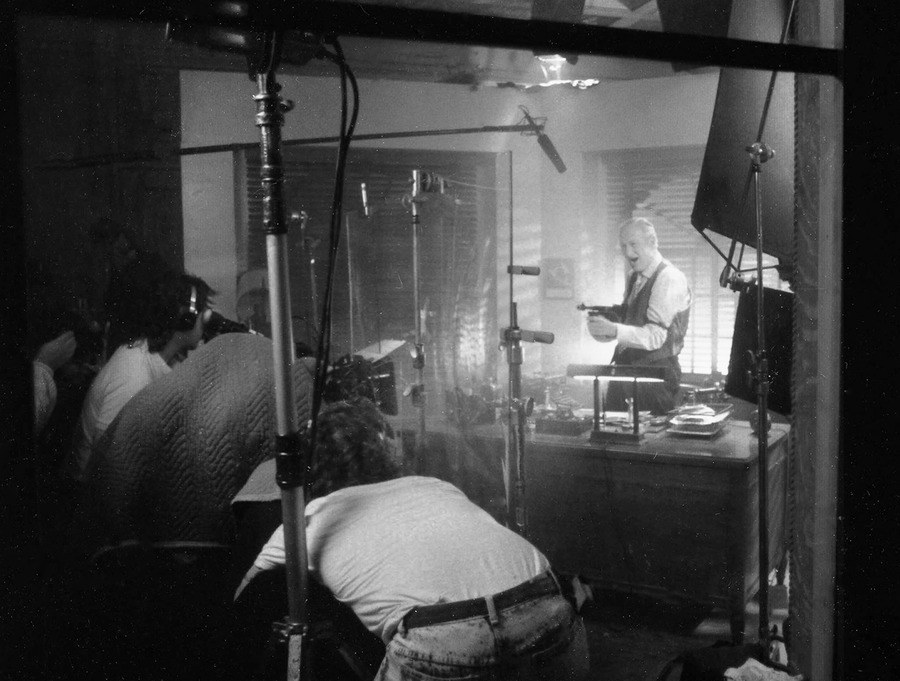 Behind the scenes of “Angels with Filthy Souls” (source: www.vanityfair.com)

To produce the clip, producers used the techniques and black-and-white negative film stock of movies from the 40s. Also, they used antique props, including an old typewriter, a pair of binoculars and a Colt 1921AC Thompson submachine gun—the same one used by James Cagney in the 1935 film G-Men. The title Angels with Filthy Souls came up later, as art director Dan Webster explains:

“I believe the title was decided upon only because we needed to create a label for the tape Kevin puts in the VHS player”. 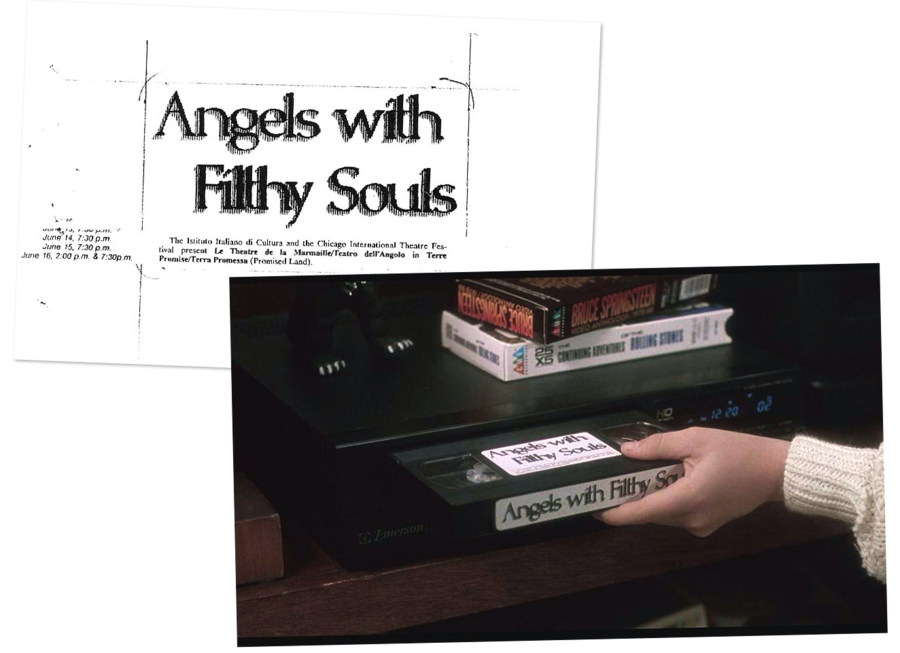 To the left, the original label for the tape Kevin puts in the VHS player. To the right, a scene from Home Alone. (source: www.vanityfair.com)

The short film perfectly fits into the film’s plot. For example, Kevin uses it to make the delivery boy believe that it was an adult who ordered the pizza; then, to trick the thieves who wanted to enter his house, making them believe that dangerous armed men are inside. The title refers to a 1938 film, Angels with Dirty Faces, which also belongs to the gangster sub-genre.

Again, the short film plays a key role: in fact, thanks to the tape, Kevin can keep the hotel staff busy and frighten them, so that he can get away with ease.

If you’ve seen Quentin Tarantino’s Inglourious Basterds, you’ll certainly remember the magnificent ending, with the premiére of the film Pride of the Nation. Among the guests, many Nazi Party leaders and officials, including Hermann Goering, Martin Bormann and Adolf Hitler himself.

The film stars Friedrich Zoller, a German hero who managed to survive alone in a bell tower during a clash in Italy, killing 300 enemy soldiers. However, surprise surprise, this film doesn’t exist. It is a short film, lasting about 6 minutes, shot by director Eli Roth exclusively for Tarantino’s film.

Initially, the idea was to shoot just a few scenes of the battle, but Roth wanted a whole, complete film. Furthermore, the posters for the fake propaganda film are historically accurate, as it also bears German censor approval stamp and they are rendered in the style of the actual film posters of that era. 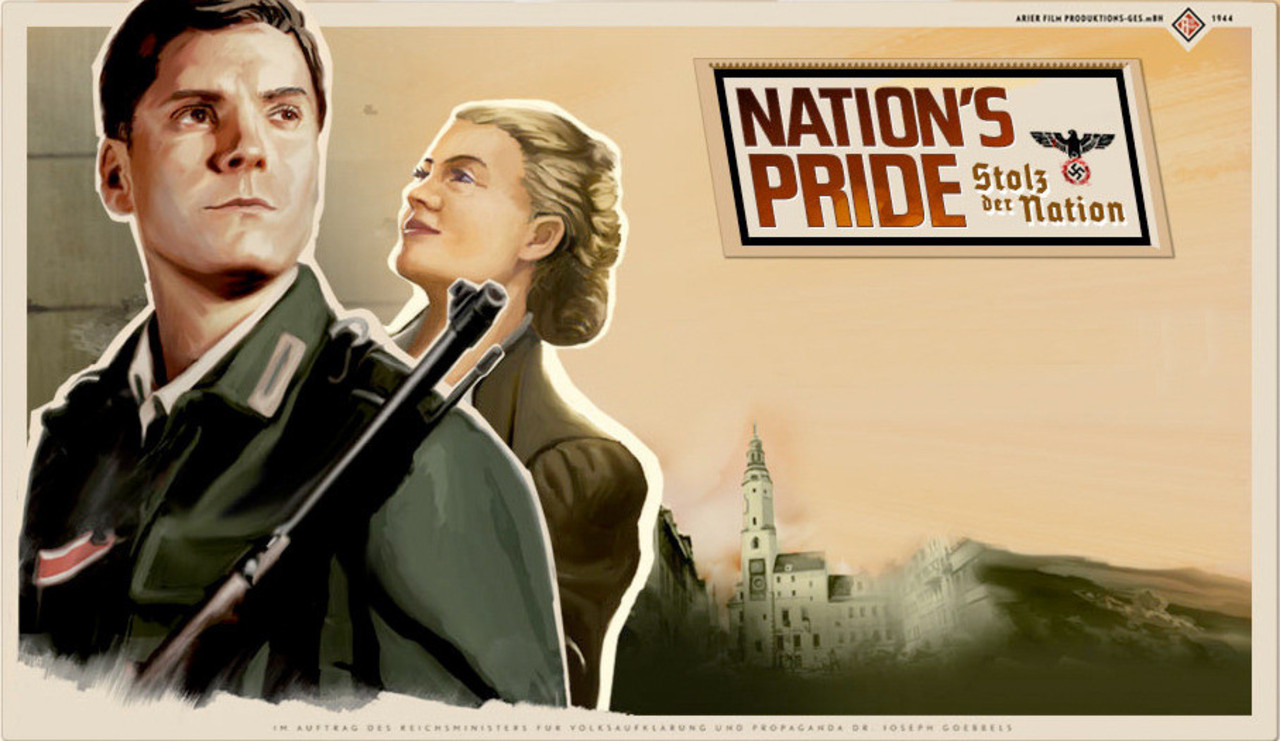 The short film is filled with refined cinematic homages. For example, the scene where a soldier is shot in the eye and screams and the baby carriage scene are clear homages to Sergei Eisenstein’s Battleship Potemkin (1925).

Another homage is to the “Wilhelm Scream”, a very famous stock sound effect of a man screaming. It was originally recorded in 1953 for the film The Charge at Feather River, released 9 years after the fictitious release of Nation’s Pride, which means that it would not have existed yet.

Cecilia is a pretty young woman who lives in New York at the time of the Great Depression. She is married to a lazy and deadbeat husband, and unhappy in her job. To escape her dreary life, she loves to go to the movies. The latest of these movies is The Purple Rose of Cairo, which she watches over and over. One day, one of the characters in the movie walks off the screen into the audience, stating that he has seen Cecilia at several screenings before, and has fallen in love with her.

Again, this film doesn’t exist, but it’s been written by Woody Allen, who also directs the whole film.

The fictional film is played several times throughout the real film, sometimes with different scenes, other times with repeated scenes, in order to convey the sense of repetitiveness that gives watching a film over and over. The plot is not closely related to the real film, but the setting and the style are typical of that period.

Allen, in fact, is very fond of New York (as he showed so many times), and this film can be considered a homage to the New York of that period. There is also a clear reference to many classic movies, such as Hellzapoppin’, a 1941 musical, where an actor breaks into the real world through the big screen. Every cinephile’s secret dream.